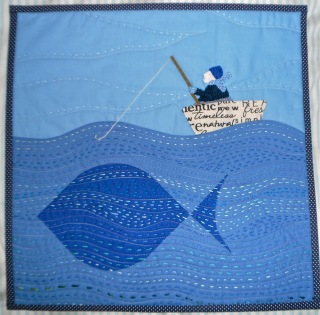 I was wondering about what to enter into the Quilt Festival at Amy’s Creative Side and I suddenly remembered my ‘old man and the sea’ wall hanging. Unfortunately, I only have dull Winter photos because I made it in December and gave it to my son, who lives by the sea in Portsmouth. I’ve decided to enter it anyway, though, because it’s my favourite small quilt I’ve made. 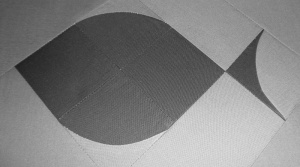 This quilt began when I visited the lovely Karen from Laughter in Quilts and she had made this stunning drunkards path mini quilt – do have a look! I was admiring her amazing fmq and suddenly I saw a fish!

Who knew you could arrange trimmed dps into a perfect fish shape! Probably everyone but it was a revelation to me. So I found a scrap of paper and scribbled away until I had a seemingly small ocean of fish. Then I did some calculations and discovered that would make a bigger-than-kingsize quilt unless I made 1″ dps, which I wasn’t really up for. So I scaled back and decided to make one fish to start with.

Then I added added some triangles to square up the ‘sea’ and added and an improv curve and a boat…and it was looking very blue, which was good because blue was the colour of the month in the Colour My World Challenge that M-R hosted over at Quilt Matters. 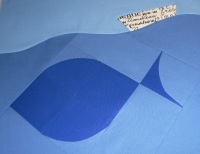 I also thought the fish was looking a bit obvious so I added some blue stitching to blend it in a bit…and some more blue stitching for the sky…and having become just a touch fixated with adding thread, I decided, for my fisherman to try some improv knitting (using six strands of anchor embroidery thread and 2mm needles) and I was really happy with how he turned out – a fisherman needs a jumper (+ hat, scarf and mitts!) and it was so much easier than appliquéing fabric!
Here are some more details of the finished piece.

I hope you like my little wall hanging and I hope you enjoy the Festival! 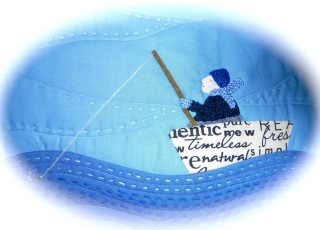 29 thoughts on “The Old Man Goes to the Festival!”