I’ve reached a stage with my trip-a-long of having sixteen blocks finished and sewn together. I didn’t actually have enough scraps to attempt this so I used some fat quarters and cut into some half yards and I cut the strips at 3 1/2′ so my top now measures 60′ x 60′.

(I decided to settle for inside pictures after a little incident with the red and white quilt which had to have three goes through the washing machine to recover from it’s attempted photo shoot).

My trip was semi-planned, using ‘Odds and Ends’ words for the main diagonals but now I’ve run myself out of several of the prints so I need to work out some kind of a border with the ones I have left… 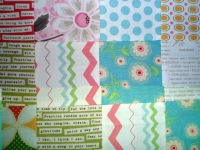 In the meantime, I reached a stage of being behind with several bee blocks so I’m going to press on with those and link up the trip-a-long with Melissa at Sew Bitter Sweet Designs for A Lovely Year of finishes and I’ll come back to finish it up a bit later in the month. If you haven’t linked up yet with one thing you want to get finished in February, there’s still three days left.
Happy Sewing!
Janine @ Rainbow Hare