The elf is finished!

The colour for December in the Colour My World Challenge, inspired and hosted by M-R at Quilt Matters was green. 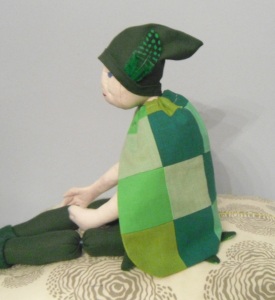 The basic pattern I used was the same as the midwinter faery, based on Miranda in book called Introduction to Making Cloth Dolls by Jan Horrox. I think his hands turned out better and his face was easier because I was aiming for character, rather than prettiness this time.

I had intended to make something more festive for December but, although I originally thought about a Christmas elf, it seemed he was intent on becoming one of the good folk, rather than a Santa’s helper – if you meet him on the road, you’d best be polite to him!

I think a lot of the fun of doll making is the way these little people emerge with characters of their own and very easily evolve into something quite different and more interesting than expected, although perhaps more experienced doll makers have more control over their creations!

Sadly this is the last linky party for the Colour My World Challenge, It’s been my favourite challenge of the year and, although I’ve found it very challenging to work with a single colour and my results have been a bit hit and miss, I’m going to miss pondering what colour project to make each month.

M-R has a stunning mosaic of quilted blocks which are going make a wonderful quilt, whereas I have an eccentric hotch potch of random items which include both some of my favourite and also my most disliked makes of 2012. But I’ve really enjoyed the challenge and I’ve learnt lots of new things along the way. So a really big Thank You to M-R and wishing everyone very colourful sewing in 2013 :)