My Friday Finish, this week isn’t very interesting but I’m keeping up with my finish a week, however small. It’s just a simple pouch, pencil case made from the bird fabric I’ve been using for cushion backs. Unfortunately it got a mark on last night but a trip through the washing machine has saved it. I think it’ll be fine after a bit more pressing but I’m posting this quickly before I go to work so I don’t have time at the moment.

And the Near Miss!

I’d hoped to finish this up yesterday but life happened, as it does. I thought I’d post about it anyway though because it’s my fave project in a while.

I don’t think of myself as a stash hoarder but A long time ago (November 2011) I went to Sew Fresh Fabrics and bought a FQ bundle of Pernilla’s Journey by Tina Givens. I loved the fabrics and originally hoped to use them in a quilt but, disappointingly, the scale of the prints meant I had half an elephant here, a parrot without a head there…

I gave away the browns and I’ve gradually used some of the fqs in small projects but a couple are still waiting. I eventually decided to make a star quilt with the Unicorns and ordered another yard in each of the three colourways but by the time it arrived I’d moved onto other projects and even those yards were cut in different places so it was nearly impossible to fussy cut anything without a lot of waste.
So this week I decided to pair it up with some of the Valori Wells Cocoon that I got for my birthday and sew up something simple that would showcase the fabrics. Rather than make a plan, I let the quilt grow to the size of the fabrics I have. 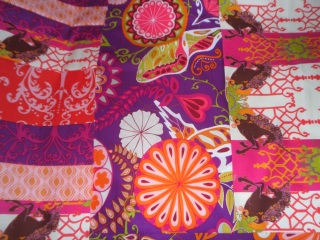 The centre is a 32 square of Unicorn fabric, which was the largest square I could cut from it keeping the design even. It’s surrounded by a nine inch border of Cocoon using virtually the whole yard. 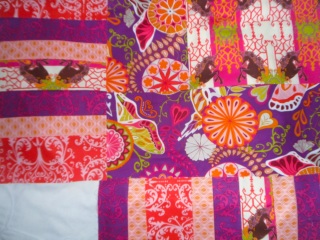 And it has an outer border of strips using the spare unicorn fabric and three half yards of Cocoon.

It has grown nearly big enough…but you can see there are some gaps in the border.

So I just need to decide on one more fq to mix into the outer border with the strips that are left I’ll soon have a flimsy and, hopefully, that will be a Friday Finish for next week!