Welcome to another Really Random Thursday! Yesterday I came across these photos that I took in 2011.
April began bright and bare-branched

A peeping through of spring flowers

And a contentedness of ducks.

Then, a few days later, I walked around the pond with Lucy, 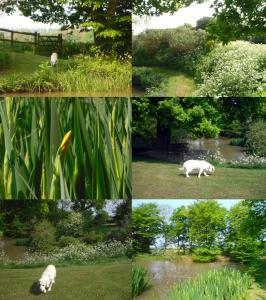 And the world was bursting into life. 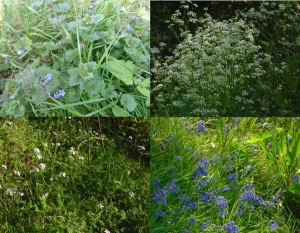 Then came a few day that were very yellow.

In the garden, the last of the last year’s leeks were turning to seed heads. The bean-sticks would last out one more year and the onion sets were doing OK – but who had been eating the cabbages?

Then, suddenly, everything was summer coloured!

This year has been somewhat different. Here are some photos I took today…
Everything is still very bare.

A few flowers have emerged in the wilder areas in the last couple of days but we’re mid-month now. 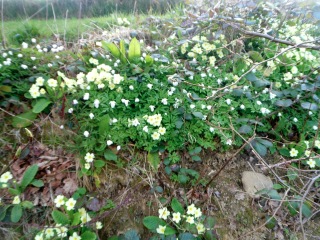 And the ground has only just dried out enough to dig.

At least Patti has magicked the snow to stop at last!
In this part of the world (and I expect elsewhere) when you try to persuade a field to become a vegetable garden the earth isn’t overly keen to change. It dutifully keeps on growing grasses and herbaceous delicacies beloved by grazing animals (I call them weeds!) 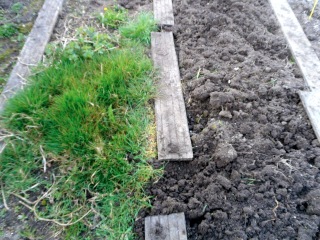 Each year it gets a little easier but I suspect it will never completely forget its years spent as meadow. So you won’t be surprised that I have no sewing to share today.
As I was weeding I thought about making a wall hanging with a sewing fairy who could move her arm to point to the words EAT, SLEEP or SEW. Today she would have been pointing to EAT
What Random do you have to share today?
Janine @ Rainbow Hare