Welcome to Wool on Sundays 55 – the epic edition – and thank you, Teresa, for linking up and everyone who left comments, last week :)

Before I tell you why this week was epic, I’d just like to mention a Radio Scotland program about Shetland knitting, which I learned about from Ericka’s blog. It’s such a delight. I know that sounds a bit random and archaic but I can’t think how else to describe and if you have even the tiniest place in your heart for wool or knitting, I’m sure you’ll love it.

I decided to set aside my crochet hexies from last week. Sooner or later, I can add them to this scarf so they needn’t go to waste but I decided that I’m just not enthusiastic enough about those wools to have a whole blanket of them. There seems to me something very autumnal about the Fabel colours and, although the weather is not cooperating, I’m feeling ready to move into Spring!

I did still want to do something with the Granny’s Paperweight blocks, inspired by ericka eckles, though so I decided to go with the Drops Safran, which I bought quite a lot of in a sale last year.

I’m very much fonder of these colours and my only reservation is that, being 4ply weight, this could take forever. I did try doubling the yarn to aran weight but it was horrible and clunky so I’ve gone back to single thickness and a 3mm hook.

Heartened by Kim’s comment, last week, I’ve set to work at an epic pace, lest I should end my days with a mere scattering of flowers like Ophelia…if you click on the picture, you will be able to see the flowers better.

And in every spare moment (and, if I’m honest, moments that weren’t really spare) I’ve been listening to the recent BBC Dramatisation of War and Peace whilst hexie making.

By looking at the colours in the bowl, I’m hoping they will all mix into a pleasing layout, though who knows? Gloria (the embroidery angel scissors) has turned up for the project anyway, which I think is a good sign because my sewing fell by the wayside when she was elsewhere and I’m hoping that she will bring me luck!

One thing I was certain of at the beginning was that if I started to do one block at a time I’d be paralysed with doubt over which colours to put together and spend more time micro-managing the design than crocheting. Also, although I read War and Peace some time last last century, it was not very fresh in mind and for for the first couple of episodes I had to listen quite carefully to establish who was who and what was going on. So I started making thirteen centres (I have fourteen colours) with a single yarn and working the next two rows once on each centre with one each of the other colours. 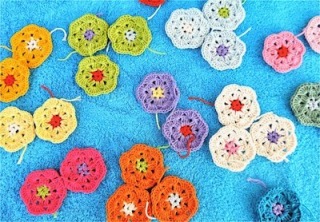 The Dramatisation is very easy listening and I hooked on and on through the evenings into the small hours, intrigued by the plotting, the twists and turns of battles and love affairs, the historical ponderings, the cultural questions…and every now and then Natasha would say So nice! So nice! and I would look at the crochet turning through my hands and almost remember that despite the chill outside and the blazing logs and the music and laughter that filled the room I was not, after all, in Moscow or Petersburg or Bald Hills but, nevertheless, as the hexies grew my agreement couldn’t be more complete – So nice! So nice!

It was not until after the burning of Moscow, and then only because I was obliged to clear the table, that I realized with some surprise, just how many hexies I had made! And don’t ask me how many because it is looking to me like hundreds but I have a bad feeling that if I counted them I’d discover I only have enough for a couple of rows of a blanket and I don’t want to get discouraged this early on :)

And, finally, after the Battle of Tarutino, I thought I’d try a few more rounds to get an idea of how it would come together. Some of these I love, some I question and some I outright dislike but, seeing a very real danger of turning into a modern day Penelope, unraveling my shroud each night, I plan not to frog anything and wait until I have enough of these to see what a decent sized selection of blocks will look like. 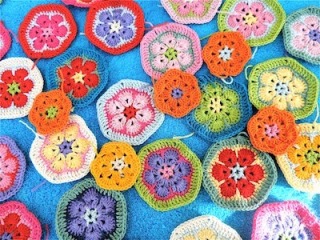 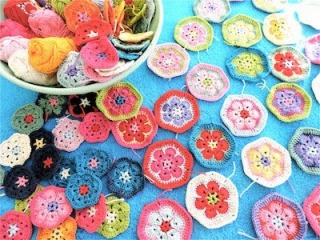 And I may, eventually, use them all them in a blanket or separate them into colour themes and use some of them for smaller items…

So I have come to the end of a literary epic adventure but here I am still very near the beginning of an epic crochet one!
Have you been working with yarn or wool this week?
If so, I’d love you to link up with WOOL ON SUNDAYS. The rules as usual are: 1). Posts must include some content – makes or musings or photos – related to knitting, crochet, felting, spinning or yarn. 2). Projects sewn from felt or wool fabric or stitchery using wool are also welcome but please don’t link posts that are exclusively about sewing, quilting and fabrics. 3). Posts don’t have to be from the past week but please put a link to WOOL ON SUNDAYS or grab the button from my sidebar and include it in or at the bottom of any posts you link up. 4). Visit anyone else who links. Wishing you a happy week :)
Janine @ Rainbow Hare