Really Random Thursday again already! Where does the week go? 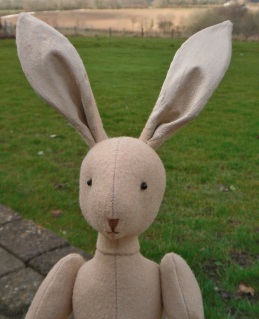 Just after Christmas I was persuaded by a youtube video to exchange my trusty wooden knitting needles that have served me many years for some hemostats and this week I tried them out for the first time. And, lest you think I’m ‘as mad as a March Hare’ to have done that, read on!

They were amazing! The handles fix and release so you can use them to turn pieces right-side-out easily and because you can ‘grab’ the stuffing you can push it exactly where you want it – no more wrinkly rag dolls! I’d say my March Hare is the best stuffed toy I’ve ever made and he was also by far the quickest.

Although, when I tried another small brown hare (you might remember the first one blogged here) it was still fiddly and difficult!

I was intending to embed the youtube video here but, unfortunately, blogger was having issues with saving it for some reason so here is a link. It really is a must-see if you’re a newbie doll maker and the only thing I would add is that it’s much easier to mark and sew your pieces before cutting them out, wherever possible. 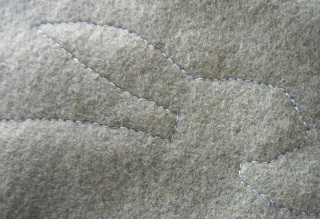 I was very nervous about doing the faces so I put it off until this morning. I was happy with the little one…

Less so his big friend but overall I’m very pleased with how they’ve turned out. (Note to self – next time make bigger: facial features + tummy + upper arms and think about re-shaping feet).

Getting back to being ‘as mad as a March hare’, the earliest expression of this idea on record was circa 1500, in Blowbol’s Test reprinted by W. C. Hazlitt in Remains Early Popular Poetry of England, 1864:

And it’s been in continuous use in the language ever since (The Phrase Finder), enjoying greatest popularity, these days, in association with Lewis Carroll’s Hare in Alice’s Adventures in Wonderland:

“The March Hare … as this is May, it won’t be raving mad – at least not so mad as it was in March.”
But it is now understood that when you see hares chasing around and boxing during the mating season, this is not madness – just partying! (See more here).

The phrase ‘as mad as a hatter’ though, tells another story altogether. According to Phrase Finder,  Mercury used to be used in the making of hats. This was known to have affected the nervous systems of hatters, causing them to tremble and appear insane…

I’m looking forward to seeing whatever randomness everyone else is posting about this week!

I’m linking up with:

And because this is also my Friday Finish this week I’m linking up with TGIFF and crazy mom quilts too :)