I have been having camera issues! Every time I’ve connected my camera and lap top lately my photos have been disappearing :( I’ve been madly sewing late into the nights trying to make everyone Christmas presents and then no pictures but I think I’ve solved this now so these photos were a quick test. This was the most difficult present – not making the cushion itself but deciding what to do. One of my sons asked me to make a cushion for his girlfriend. I’ve never met her and all I had to go on was she loves music and cellos (she’s a professional cellist) and she also likes black cats. 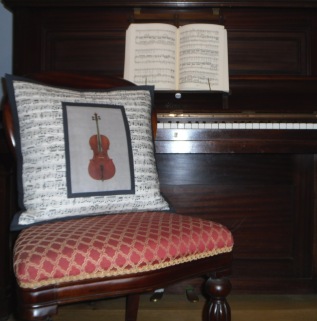 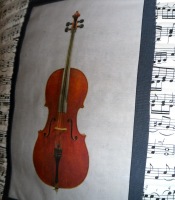 Unfortunately I only had one TAP Transfer Sheet and my first attempt at the cello (onto linen) had some blotchy colouring, although I liked the overall effect better than this one. Rather than order on line and have to wait, I bought some WH Smiths Light T-Shirt Transfers I thought this gave a good clear image but it very shiny and think it looks a bit plasticcy :( The music fabric is
‘Musical Notes’ by Timeless Treasures. After endless searching, I found this at The Peacock and the Tortoise – a lovely ‘real’ shop in Perth – and, although they say items ‘can be shipped within 5-7 working days’, it arrived within less than 24 hours and they sent me a free fq. I’m really hoping she’s going to like it!

I’m so happy to be able to blog again! I hope everyones is having a good weekend,
Janine @ Rainbow Hare