Welcome to the February edition of Wool on Sundays! Have you had a yarnful month?

For the first couple of weeks of the year I had no yarn projects in progress but by the middle of January, I decided it really was time for some more knitting so I laid out all my yarn to properly see what I had enough of to make a cardigan. And I found (not surprisingly) there wasn’t really anything in a single colour. Then, in a claimed ‘Final Day of the January Sale’ on Love Knitting, I saw some West Yorkshire Spinners Aire Valley Aran (75% Wool, 25% Nylon, Machine Washable) on sale for £2.49 per 100g ball (meaning that for £13-£14 I could make a very good quality cardigan, produced with labour and animal welfare standards I find acceptable and which will last for years).

The only downside was the colour – Emerald – but, apart from black, all the other shades were sold out so I placed an order and hoped that it would be less bright in real life than on screen. Unfortunately, it was not :( But, having bought the yarn, I cast on anyway thinking maybe I could dye it when it was finished. I chose a free pattern, which you can find here and I can honestly say that I don’t think I’ve ever disliked anything so much during the making! The pattern, seemed to me, to be unnecessarily confusing and I never could get the pattern placement on the front to line up in a way I liked so I abandoned the V and turned it into a round neck. And I really did not like the colour and began to seriously doubt whether dying a wool/nylon mix would even be possible without completely wrecking it. But I was determined not to start the year with an endless WIP, or worse still a UFO, hanging over me so I resolved just to knit as fast as often as I could and get through it! 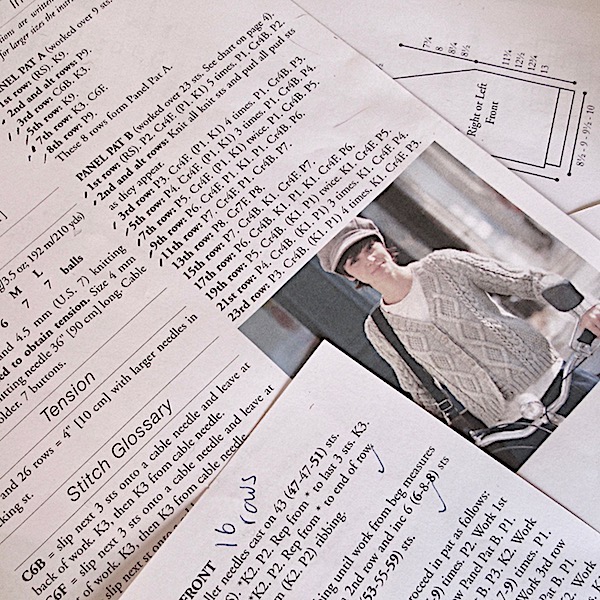 My temptation to give up was tried even further, when a couple of days later the Love Knitting sale was extended and other, nicer colours became available. And again after I bought some of those nicer colours and even more so after they arrived. I put them in a corner out of sight but I kept hearing them calling “Knit me instead! Knit me instead! You can go back to the Emerald another day…” But I stopped up my ears and knitted even faster.

And, suddenly, last night, I realised it was very nearly finished. All bar the buttons. And I’m finding myself liking it a lot more than I expected and thinking perhaps it’s just more of a Spring and Summer colour and will come into its own when the world about us brightens up a little…I have a sneaking suspicion that, after all my reluctance to complete it, I may end up living in this cardigan.

If you have any wool/yarn posts to share, I’d love you to link up. The rules, as usual, are: 1). Posts must include some content – makes or musings or photos – related to knitting, crochet, felting, spinning or yarn. 2). Projects sewn from felt or wool fabric or stitchery using wool are also welcome but please don’t link posts that are exclusively about sewing, quilting and fabrics. 3). Posts don’t have to be from the past week but please put a link to WOOL ON SUNDAYS or grab the button from my sidebar and include it in or at the bottom of any posts you link up. 4). MOST IMPORTANT visit anyone else who links. The next Wool on Sundays will be on Sunday 4th March.

Please click on the button below to link up or view linked posts.